Project Categories
The Encyclopedia of
the Dead Kafanas
Data visualization homage to writer Danilo Kiš. A collaborative research workshop project and a hand-made map of Belgrade kafanas, traditional Balkan bistros Kiš enlists in his book The Encyclopedia of the Dead. 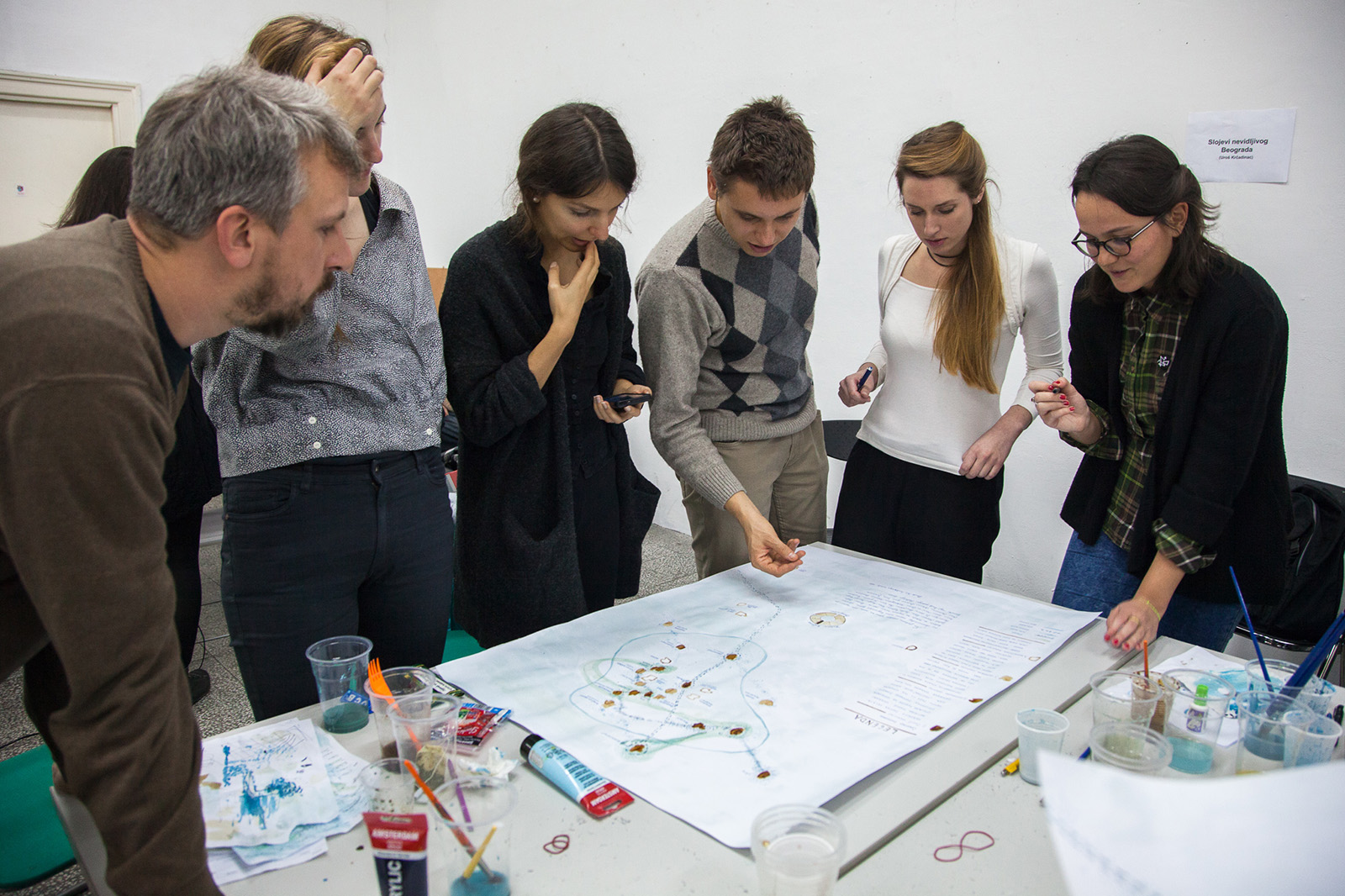 The literature of Danilo Kiš was extensively fact-driven. He used different documents, statistics, encyclopedia notes, lists, numbers, personal letters, record cards, timetables. It was dubbed faction, the blend of fact and fiction. In my opinion, a better term would be – data literature. The art of database-driven storytelling.

I was invited to conceptualize a mapmaking data-related workshop for the Belgrade-based Map as Medium Conference, organized by Tačka komunikacije. In his short-story book, The Encyclopedia of the Dead, published in 1983, Kiš drew a topographical sketch of his era by naming the most important Belgrade kafanas, traditional bistros that hold a special place within the collective imagination of the Balkan region:

On the aquamarine background of a large soda-water siphon he painted the names of Belgrade cafés in the lettering he had once used for islands on maps: The Brioni, The Gulf of Kotor, The Seagull, The Sailor, The Daybreak, Café Serbia, The Vidin Gate, The Istanbul Gate, The Skadarlija, The Three Hats, The Two Deer, Under the Linden, Three Bunches of Grapes, The Šumatovac, The Seven Days, The March on the Drina, The Kalemegdan, The Kolarac, The Homeland, The Plowman, The Obrenovac, The Oplenac, The Town of Dušan, The River’s Mouth, The Smederevo, The Hunter’s Horn, The Question Mark, The Last Chance.

There is an entire fluid history hidden in these toponyms. We started the workshop by asking ourselves – where are these kafanas today? Thirty years and several countries later. Do they exist? If yes, did their identity change? What was the clientele back then and what is it now? How did social changes, in terms of identity and class, affect these bars and bistros? What about creating a new media, infographic homage to Kiš's geographical poetry?

To begin with, we defined what constitutes a kafana's identity: its visual identity, price range, smells, geographical and class structure of its guests, music genre, menu content, etc.

We collected data in the field. We visited all toponyms in Kiš's list. Some kafanas still exist, others have a different name, while many have been replaced by banks, casinos, bakeries, pharmacies – the standard businesses of post-socialist transition – or have simply been demolished.

In terms of identity, we've singled out four types: kafanas whose identity hasn't changed significanlty since Kiš's time; those that drastically changed their identity; those in between; and those that no longer exist – ghost kafanas. In terms of social class, there are kafanas for the upper, middle, and lower class, as well as kafanas for tourists. As additional content, we have included excerpts from conversations with waiters.

We have also outlined a wider geographical area from Istria to Istanbul, which, like watercolors, can be seen in kafana name vectors: Istanbul, Vidin, Boka, Brioni, Shkodra, The Town of Dušan, Drina, Obrenovac, Oplenac, Smederevo.

We painted the map by hand. We used graphite pencils, ink, watercolors, as well as coffee as painting medium. We tried to make dirty and fluid visuals correspond to the idea of dirty and fluid geographical identities.

The project was presented at the final exhibition of the Map as Media Conference at the Magacin Cultural Center in Belgrade. I've also presented the project during my lectures and public talks. ■