Project Categories
The Eye of Sahara
Low-budget expedition undertaken by Lazar Pašćanović, Inesa Adamonyte, and me. We traveled by land from Spain to the Richat Structure in Mauritania, deep inside the Sahara desert. An experimental geography project followed by photo and video essays, maps, and talks. 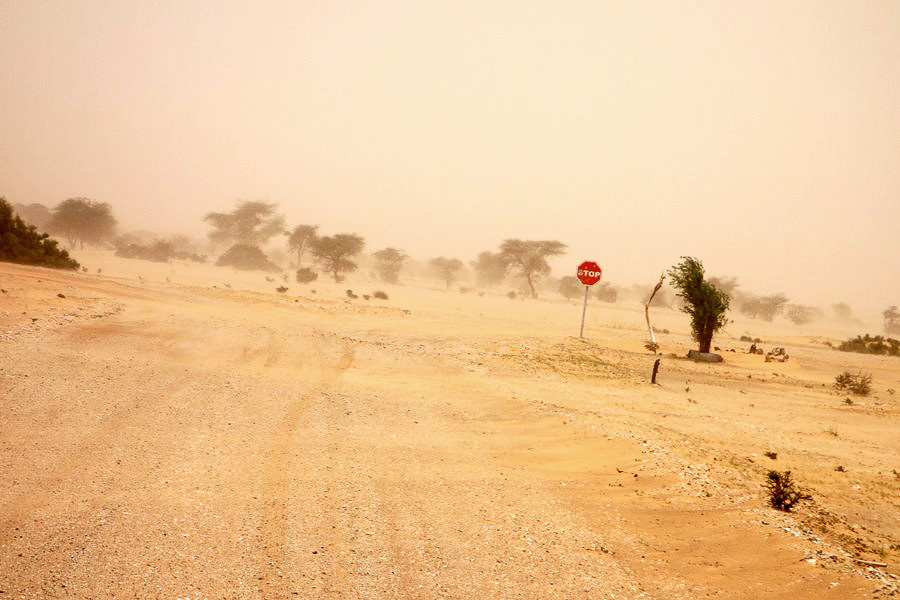 The project was conceived in 2013, three years after our first journey to Africa, the one we talk about in our book Bantustan: Atlas of an African Journey. This time we traveled to West Africa. The idea came by chance: while spending hours on Google Maps, Lazar Pašćanović and me discovered the Richat Structure, a Dantesque crater deep in Sahara hinterlands, whose rims widen in regular concentric circles. We wondered, is it possible to reach it with a modest Balkan budget?

A juncture between geographical study and artistic experience of the Earth – this is how the artist T. Paglen and the curator and writer N. Thompson defined experimental geography. This builds on the old practices of psychogeography and situationism, and to some extent on the concept of geopoetics defined by K. White. In the context of The Travel Club (Klub putnika), the act of traveling is an anti-tourist, creative, and subversive act – an act of exploration, solidarity, and friendship.

Lazar Pašćanović, Inesa Adamonyte, and I traveled for almost a month. From Granada, across the Strait of Gibraltar to Morocco, hitchhiking through Fez, Meknes, Rabat, and Marrakech, taking a bus through Western Sahara, Laayoune, and Dakhla to Mauritania, taking a train from Nouadhibou to Choum and an off-road vehicle from Atar, through Ouadane, all the way to the Eye of Sahara. Then back: Atar, Nouakchott, Rosso, Dakar in Senegal and back to Europe by plane.

Scientists are not sure how the Eye of the Sahara came to be. Having stunning geological features, in the center of this inverted dome there is a megabreccia, rocks formed from fragments of countless other rocks. The Eye of Sahara is a large smelter of Earth's matter, a vortex that takes everything in. Like the era we live in. Like globalization. Like planetary migrations, like climate change. The story of the Eye is a story about people we met along the way and all those we didn't, moving from the center to the periphery of the World System. It is a story about a cauldron in which we are melt together. In the words of A. Badiou: There is only one world.

After we came back, we completed several video projects out of the material we recorded along the way, such as Zuruni. Together with Smirna Kulenović, an artist from Sarajevo, we created The Man with the Big Mustache, a sort-of trailer for a film we still haven't made. Lazar directed No Life, a short documentary video about one of the people we met, a Sahrawi migrant living on the outskirts of Nouadhibou, on a Chinese ship graveyard near the Atlantic Ocean.

Project-related media also include Inesa's photo essays and a collection of hand-drawn maps, which were sketched by people we met along the way. I asked them to draw us a map of their personal homeland, a geography they feel as their own.

These photo and video essays, stories, maps, and drawings were a part of the Travel Artist Talk I gave at the Belgrade Center for the Promotion of Science. In addition, I incorporated parts of this project and the Bantustan book project into the official syllabus of the Interactive Narrative and Ergodic Literature course, which I designed for the Department of Digital Art, Faculty of Media and Communications, Belgrade. ■